Percy Frederick George (George) (3 March 1905- 18 July 1946) married Irene Shockley in 1931 and had three sons. George went to Ruthin School and St Lawrence College, Ramsgate (the latter proving to be connected with the Bradley family more than was previously thought – see notes on Dr Samuel Messenger Bradley). George attended Liverpool University and obtained an Engineering Degree. Unfortunately he was not allowed to be awarded with the Degree as it was discovered he had never matriculated! He was in the RAF as a pilot and was killed in an aircraft accident while testing a new jet engine in 1946. He had just been promulgated Air Commodore, sadly with effect from a few days after his death.

William Albert Raymond (Ray) (1906-1933) also went to St Lawrence College and then into the Cotton trade with his father. He spent some time in Hamburg, Germany and has left some lovely photos of life in the late 1920s/early 1930s. He sadly died of cancer in 1933.

Connla John Osman (Osman) (10 April 1908-2007), another pupil at St Lawrence. After work with cotton merchants in India, he later became a lay missionary with BCMS. At the outbreak of war he joined the Ghurka Rifles and became a Major. After the war he returned to England and attended Theological College and was ordained as a Church of England minister. He was vicar at Peckham, Frogmore, St Albans (1955-68) and Havering-Atte-Bower, Chelmsford (1968-76). Osman married and had 2 step-children and one child.

John Howard (Howard), (5 May 1910-25 February 2004) the last sibling to attend St Lawrence had to leave aged 15 (family financial problems). He started out in the Cotton industry but during the war he served in the RAF. On his return his job was no longer available so he took up accountancy and joined the Liverpool firm of Glass and Edwards in 1946 (age 36) as an articled clerk. He eventually became senior partner in the firm Duncan Glass. He had the honour of being President of the Liverpool Society of Chartered Accountants in 1963.  He married Laura Dilys Jones.  In 1939 Howard and Dilys were living in Ennerdale Road, Birkenhead.

Dora Eleanor Constance (Nora) (14 April 1912- 13 April 1998), the only daughter, attended Belvedere School in Liverpool and after running a small school in Brombrough,Wirral, trained as a nurse at St Bartholomews Hospital in London, specialising in midwifery and then became more involved in the administrative side, eventually holding a senior position in the NHS in South East England.

Arthur Sidney Nicholas (Dick )(23 March 1916-8 January 2014) was a pupil at Ruthin School, N Wales. Following service in India in the RAF, he remained there for a few years teaching, specialising in woodwork and metalwork. On returning to England he taught at Monkton Combe School near Bath, Bruton Junior School, and St Probus in Salisbury. This he did for many years until, never having had official training, he went to Teacher`s Training College and qualified. He then taught at Spendlove School, Charlbury in the Cotswolds. He has been very involved in the Scouting Movement, becoming a District Commissioner. He has also been a Lay Reader at his church in Sway in the New Forest. Dick married later in life than most – age 84.

Percy Jim (Jim) (7 September 1923-27 May 2012) made his career in the RAF, joining virtually straight from school in 1943. He served in the bomber command during the war. After the war he moved to the secretarial/accounts branch. He obtained the rank of Squadron Leader, serving twice in Singapore and once in Cyprus. He married Norah Bowler.

John Christopher (John) (1928-9 March 2021) also spent time in the RAF and then taught for a number of years at King James Grammar School on the Isle of Wight where he ran the CCF. He married Christina (Tina) Wilson in 1961. For over 20 years John was sales director of a branch of Henley`s motors. He and Tina ran their own successful company J & T Bradley, in the New Forest restoring Cheltenham caravans. John was a pupil at Birkenhead Boys School.

Their father Percy married Dorothea Emilie Constance Young, (Percy`s descendants see separate Young chapter) daughter of Col. (Dr) Thomas Frederic Young, in 1904 at St Paul`s Church, Hooton on the Wirral. They were married by the Rev`d Ernest Cullwick (Percy`s brother-in-law) and Arthur and Bobbie (two of his brothers) were witnesses.

Apparently Percy was a fluent linguist and spent some time in Germany. He worked for the German company Reiss Bros. (Cotton merchants) in Liverpool as a manager and then partner.  The Reiss family were German Immigrants, Cotton Merchants originally from Frankfurt.  The Partnership originally consisted of Friedrich, Henry Jacques, Alexander Emil, James Arthur and Charles Julius Reiss, and Gustav Eckhard.  They were based in the Cotton Exchange Building in Liverpool with offices in Manchester and London.  The partnership was dissolved in 1923 with Eckhard continuing the business under the same name and same address with Partners Percy Bradley and Norman Godfrey.  On 4th Nov. 1932 there was an article in the London Gazette stating the partnership between Astolpho George Joynson, Percy Bradley, Norman Godfrey, Charles Julius Reiss, George Whittall Joynson, Edward Bromilow Joynson, Duncan Robertson Paton, Reginald Fleming and James Vere Richardson was dissolved (Cotton and General Merchants and brokers at Orleans House, Liverpool) by mutual consent. George Joynson retires.

Notice from the London Gazette 2nd July 1935: NOTICE is hereby given that the Partnership heretofore subsisting between Astolpho George Joynson, Percy Bradley, Norman Godfrey, Charles Julius Reiss, Edward Bromilow Joynson, Duncan Robertson Paton, Reginald Fleming and James Vere Richardson, carrying on business as Cotton and General Merchants and Brokers, at Orleans House, Liverpool, 24-25, Great Tower Street, London, E.C.3, and 126, Royal Exchange, Manchester, and elsewhere, under’ the style or firm of REISS BROTHERS, has been dissolved by mutual consent as far as regards the said Percy Bradley and Edward Bromilow Joynson, both of whom have retired from the firm. All debts due and owing to or by the late firm will be respectively received and paid by the said Astopho George Joynson, Norman Godfrey, Charles Julius Reiss. Duncan Robertson Paton, Reginald Fleming and James Vere Richardson, by whom the said business will be carried on in the future, under the said style or firm of ” Reiss Brothers,” at the addresses aforesaid, and elsewhere.—Dated this first day of July, 1935. ALSOP STEVENS and COLLINS ROBINSON, 658, India Buildings, Water Street, Liver- (193) pool, Solicitors for all the said Partners.

Percy and family lived in Southport for a few years around 1910 and then to Somenos, Birkenhead Rd. Meols, Wirral until about 1916. The name ‘Somenos’ we have recently discovered originates from Vancouver Island, BC where Dorothea`s brother and parents lived in the early 1900s. Percy then moved to Liverpool to 22 Grove Park (picture dated 1923).  In the 1921 census Howard, Nora and Dick are all at Grove Park along with the housekeeper Mary Maccoull and various house servants.  It looks as though George and Osman are already at St. Lawrence in Kent. 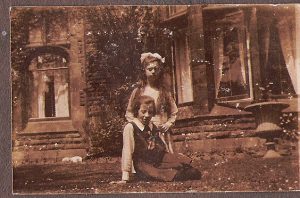 Dorothea died in the Spanish flu outbreak in 1918 (26th October) leaving Percy with the six children. Dorothea was pregnant again when she died in 1918.  In the 1921 census Percy is away in London on business and Howard, Nora and Dick are at home in Grove Park with the Housekeeper and various servants.  George, Ray and Osman are at School in Kent.  Percy then married Eleanor Harte in 1922. The business carries on, but Reiss Bros. were obviously having a difficult time in the UK with WW2 and Percy did not have any more money to put into the business. Percy had been a fairly wealthy gentleman with a good lifestyle. Financial difficulties arose and eventually this lifestyle changed for the whole family. They lived from 1923 to 1930 at Chorlton Hall, nr Chester.

(modern photo above by kind permission of the present owners Mr and Mrs Hess),  Percy lived here with Eleanor and her 3 sisters and a brother, and then a few years at The Firs, Upton-by-Chester.

Their next home was Wentworth on Meols Drive, Hoylake,

and then Glenetive, Smiths Hill, West Kirby.  In the 1939 census Percy and Eleanor are living in Shrewsbury Road, Birkenhead.  There are 2 lines blanked out underneath their names which are presumably Jim and John.  At this stage George, Ray, Osman and Howard had moved out of the family home.  Percy died 25th December 1946 whilst temporarily living in a caravan in the garden of a house in Oxton, Birkenhead, the house being converted into flats.

Percy was one of 16 children born to Frederic and Eliza (Piggott).